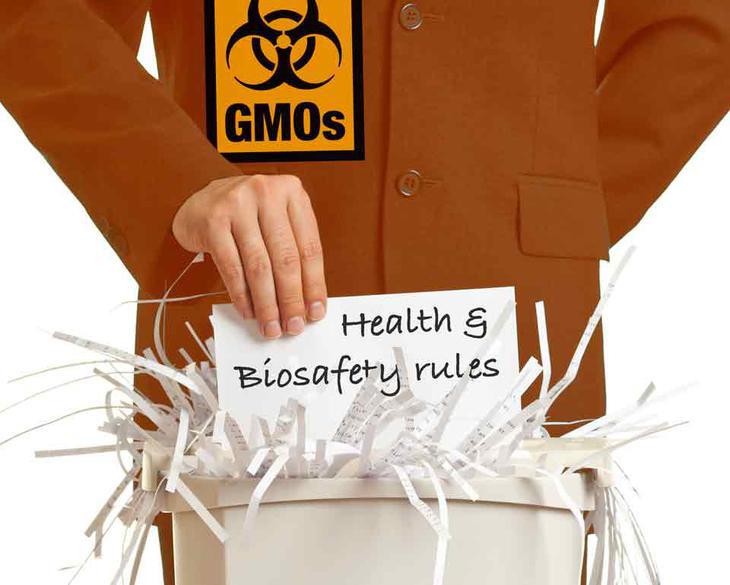 The Australian government is tearing up regulations that were put in place to protect us from potentially dangerous genetically modified organisms (GMOs).

Changes to the Gene Technology Regulations currently tabled in Federal Parliament will leave the majority of new CRISPR and other gene editing applications unregulated and allow anyone to genetically modify animals, plants and microbes – posing major risks to the environment and human health.

In 2016, the US Director of National Intelligence, James Clapper added gene editing techniques such as CRISPR to a list of threats posed by “weapons of mass destruction and proliferation” in the annual worldwide threat assessment report of the U.S. intelligence community. The report concluded:

“Given the broad distribution, low cost, and accelerated pace of development of this dual-use technology, its deliberate or unintentional misuse might lead to far-reaching economic and national security implications.”

Biohacking means genetically modifying a bacteria, yeast, plant or animal to change its function or physical characteristics. Increasingly, people – many with no formal biological training – are genetically engineering common microbes in community labs. Currently, such facilities must be licensed by the Office of the Gene Technology Regulator (OGTR). However, the regulatory amendments mean that anyone will be able to use GM techniques like CRISPR to genetically modify any organism, anywhere – unlicensed and unsupervised.

In 2018, both gene editing and biohacking were identified by the European Union’s Scientific Committee on Health, Environmental and Emerging Risks as issues “having the potential to significantly impact human health and /or on the environment in the future.”

Similarly a 2015 report by the Global Challenges Foundation and Oxford University identified synthetic biology – which is pretty much synonymous with gene editing – as one of the 12 risks that threaten human civilisation. This observes that:

“One of the most damaging impacts from synthetic biology would come from an engineered pathogen, targeting humans or a crucial component of the ecosystem (such as rice, which accounts for 20% of all calories consumed by humans). This could emerge through military bio-warfare, commercial bio-warfare, bio-terrorism (possibly using dual-use products developed by legitimate researchers, and currently unprotected by international legal regimes), or dangerous pathogens leaked from a lab.”

This is not idle speculation. One of the largest funders of synthetic biology globally is the Defence Advanced Research Projects Agency (DARPA) – the US military’s research arm. They are funding CSIRO and the University of Adelaide to develop gene drives – a kind of genetic extinction technology that uses CRISPR to try to wipe out certain genetic populations. The technology is being trialled in mice initially – but it’s pretty obvious what its dual- use potential is.

The chance of a rogue actor or even a bumbling biohacker creating a dangerous pathogen is very real when you consider that even small changes in the genome of microbes can result in large increases in pathogenicity. For example, it was found that a single mutation in one Zika virus protein contributes to fetal microcephaly.

The OGTR acknowledged this problem in its discussion paper regarding the current amendments to the Gene Technology Regulations:

“Exclusion of a particular technique from regulation would result in all plants, animals or microbes modified by that technique being excluded. To date there has been a focus on plant applications of new technologies because these applications are closest to commercialisation. However, for pests or disease-causing organisms, for example pathogenic microorganisms, small sequence changes might give rise to significant risks. Blanket exclusions may not be commensurate with the level of risk posed by these techniques.”

Our regulator is warning that deregulating these techniques is potentially dangerous. So why on earth is the government doing it?

There is a small clue in the second sentence – “To date there has been a focus on plant applications”. What the OGTR really means is that there has been a concerted global push by the GM crop industry i.e. BASF, Bayer, Syngenta and Dow, to deregulate these techniques.

Industry ‘experts’ have stacked Government advisory panels. Politicians, their advisors, bureaucrats and farming groups have all been intensively lobbied – and there is the infamous revolving door. Louisa Matthew who coordinated the OGTR review is a former genetic engineer with CSIRO and CropLife’s CEO Matthew Cossey is a former senior official and campaign director for the Australian Labor Party.

All of which of course is no excuse for the Australian Government turning the whole country into a giant unregulated genetic engineering experiment.