Feral cats aren’t the biggest threat to our native wildlife 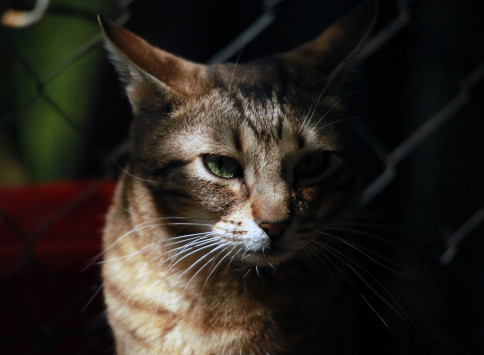 A new study by the Northern Territory Government’s Department of Environment and Natural Resources (DENR) suggests that feral cats aren’t as great a menace to the Top End’s native mammals as previously thought. The study comes as the Federal Government conducts an inquiry into the problem of feral and domestic cats in Australia and considers the use of dangerous gene drive technology to try to control their numbers. While it is politically expedient for the Federal Government to blame feral cats for our current extinction crisis – rather than its own failure to prevent the steady erosion of critical habitat by unchecked land clearing and climate change – the science suggests otherwise.

Feral cats undoubtedly have a catastrophic impact on our native wildlife. They are estimated to eat tens of millions of native animals each night in Australia. However, habitat loss remains the number one threat to Australia’s species. The new study suggests that protecting and recovering complex habitat by improving fire regimes and reducing feral cattle, horse and buffalo impacts is a more likely solution to northern Australia’s native mammal crisis than targeted feral cat control.

Importantly, habitat destruction makes rare and endangered species much more vulnerable to threats such as predation. When habitats are intact, large and in good natural condition, the species that depend on them are much better equipped to withstand the multiple threats to their survival and rehabilitation. But as habitat is destroyed and chopped into smaller fragments, species’ populations become smaller, more isolated, less genetically diverse and more vulnerable.

There is now broad consensus that a network of large, feral predator-free fenced areas must form part of any strategy to prevent further extinctions of Australian wildlife. A range of direct and indirect methods will also be necessary if the impact of feral cat populations on native animals is to be mitigated. Direct control includes a range of techniques such as trapping, shooting, and Indigenous tracking. Indirect control includes managing ground cover (for example through de-stocking and prescribed burning) to promote shelter for wildlife and reduce the impact of predation.

What are gene drives?

Engineered Gene Drives are a new form of genetic modification that uses the gene editing technique CRISPR/Cas. To create gene drives, this bacterial defence system is transferred into animals – creating organisms that could never occur in nature. Unlike previous genetically modified organisms they are deliberately designed to spread their genes far and wide into wild populations of the target species. They offer the potential to permanently modify or to eradicate local populations – or even entire species – in the wild.

Gene drives have been suggested as a potential way to control feral cats in Australia. CSIRO is one of the main organisations researching and promoting such a strategy, and is being funded by the US military’s Defense Advanced Research Projects Agency (DARPA) to do so.

Because of the high level of unpredictability, the lack of knowledge and the potentially severe negative impacts on biodiversity and ecosystems, both scientists and over 200 global NGOs have called for a moratorium on the environmental release of gene drives.

CRISPR is prone to unintended impacts

Studies have shown that the gene-editing tool CRISPR used to create gene drives can result in significant mutations – such as large deletions and complex rearrangements of DNA. Another recent study found that CRISPR produced foreign mRNAs or proteins in about 50 per cent of the cell lines studied – raising serious questions about the safety and predictability of this gene editing technique.

The potential for CRISPR to edit unintended regions of DNA – so called off-target effects – is well recognised. An extremely good and accurate knowledge of the DNA sequence of an organism is therefore important in order to predict off-target effects. This will pose serious challenges when applying the technique to wild and diverse populations, where genetic variation within a species could render the gene drive ineffective.

No one knows if gene drives will work in mammals

As CSIRO themselves point out – scientists still don’t know if they can make gene drives work in mammals. Any potential deployment in feral cats – if it is even technically feasible – is likely to be many years away. Attempts to develop a gene drive in mice have so far been unsuccessful, with the scientists conducting this research commenting that “both the optimism and concern that gene drives may soon be used to reduce invasive rodent populations in the wild is likely premature.”

Studies in mosquitoes suggest that the chances of species developing resistance to gene drives that render them ineffective is high. Modelling in mice has confirmed this presents a serious problem.

Studies suggest gene drives are likely to be most effective in species with short generation times, large numbers of progeny, that mate randomly and that are not genetically diverse. None of these factors are true of feral cats. Scientists also observe “feral cats are problematic to maintain as they are a solitary-living species whose physiology and behaviours have been shown to change in captivity.” It is not clear if cats modified with gene drives and bred in captivity would be able to successfully breed with feral cats after release.

The opportunity cost of gene drives

Proponents and the science media often portray the purported benefits of gene drives as unquestionable, with the risks played down as not being proven or demonstrated. However, the reality is really quite different. As scientists observe:

“the ability of engineered gene drives to perform according to plan and to deliver the envisaged benefits is still largely hypothetical, the associated risks to biodiversity, human health and agroecosystems, on the other hand are very real.”

Gene drives are an unpredictable, expensive and unproven techno-fix that must be viewed in the context of other proven solutions to the problem such as fencing or employing indigenous rangers to cull cats.

Gene drives have dual use potential

A number of scientists have raised serious concerns about the potential military application of gene drive technology. Professor David Gurwitz raises concerns that:

“just as gene drives can make mosquitoes unfit for hosting and spreading the malaria parasite, they could conceivably be designed with gene drives carrying cargo for delivering lethal bacteria toxins to humans. Other scary scenarios, such as targeted attacks on major crop plants, could also be envisaged.”

Read our submission to the inquiry into the problem of feral and domestic cats in Australia.