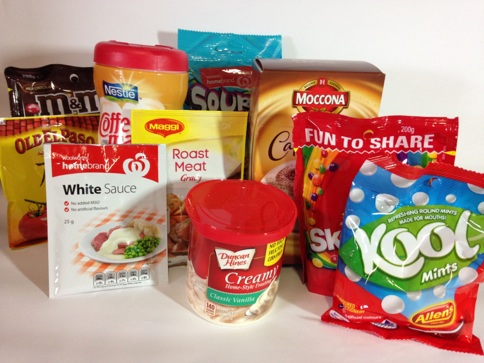 The silica and titanium dioxide in all 14 food products tested contained a high proportion of nanoparticles that have not been tested, labelled or approved for consumption in Australia. Furthermore, peer reviewed studies have raised health serious health concerns regarding the use of these nanoparticles in food.

For over two years, our food regulator Food Standards Australia New Zealand (FSANZ) has insisted that foods containing nanomaterials are not sold here on the basis that no companies have applied for approval (1). The agency has done no testing and hasn’t even asked manufacturers if its claim is true.

FSANZ has also told Parliament that food products containing these ingredients will not be sold until they have been subject to safety testing and pre-market approval (2).  By allowing these untested and potentially harmful substances into the food chain, FSANZ has inexcusably failed in its role as a regulator.

Four years ago, a Government commissioned review of food labelling urged FSANZ to “develop as a matter of urgency a standard for regulating the presence of nanotechnology in the food production chain”.   Thus far, FSANZ has taken no action on this either.

Nano titanium dioxide is used as a whitener and brightener in a range of foods, including lollies, chewing gum and doughnuts. Children between the age of 2 and 4 have been found to have the highest exposure levels. Animal studies of nano titanium dioxide show it can damage DNA, disrupt cell function, interfere with the immune system, cross the intestinal tract and cause organ damage.

Nano silica is used as a ‘trickle and flow’ aid in powdered food products. This year the European Commission’s Scientific Committee on Consumer Safety (SCCS) found evidence that nano silica can damage DNA  and concluded that the data is inadequate and no conclusion of safety can be made.  Several recent studies have shown that nano silica can cause liver toxicity .

We provided evidence to FSANZ over a year ago that it is highly likely that foods containing manufactured nanoparticles are in the Australian food chain. The fact that every sample we tested contained a high proportion of nanoparticles, suggests that the use of nanomaterials in Australian foods is widespread.

Friends of the Earth Australia is calling for recall of all products containing nanomaterials and an immediate moratorium on the use of nanomaterials in food, pending full safety assessments.

Don’t be surprised however if FSANZ responds by doing nothing and simply claiming that these foods are safe based on the fact that these materials at conventional scale have been used in food for a long time. This is completely unfounded and unacceptable. As FSANZ’s sister agency the Australian Pesticides and Veterinary Medicine Authority points out “there appears to be a general consensus that as a result of an increased surface area, altered surface chemistry and increased potential for dissolution, there is a potential for nanoparticles to exhibit a toxicity profile that deviates from that of conventional materials of the same composition.”

(1) FSANZ, response to Questions on Notice, Senate Estimates, SQ14-000086, February 2014. – FSANZ has told Parliament that it is “not aware of any manufactured nanomaterials being used in food available in Australia,” based on the fact that it “has not received an application to amend the Australia New Zealand Food Standards in relation to new or novel nanoscale particles for food use.”