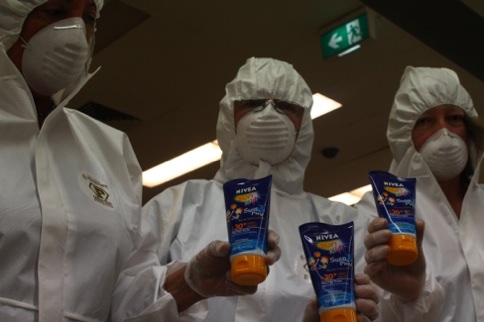 Outraged by the revelations about potentially dangerous nano-ingredients in sunscreen, a group of Melbourne mums recently decided to take matters into their own hands and remove the offending products from supermarket shelves.

The action was in response to new testing from the National Measurement Institute which revealed that many Australian sunscreen and cosmetic products still contain anatase titanium dioxide, despite years of warnings of its extreme potential to generate free radicals which could damage DNA and protein.

The product we are most concerned about is Nivea Sun ‘Kids Swim and Play’ sunscreen, since independent analysis of the results by Uniquest found that more than 90 % of the particles extracted from the product were nanoparticles.  Due to their large relative surface area, nanoparticles of anatase titanium dioxide are much more reactive than larger particles of the chemical.

In 2008, it was revealed that nanoparticles of anatase titanium dioxide in sunscreen were reacting with sunlight to produce free radicals which were breaking down the coating of Colorbond roofs in a matter of weeks. Researchers found that the nanoparticles increased the rate of sun damage by 100 times. This discovery raised serious concerns about the potential impact on our skin and scientists have questioned their use in sunscreen. Despite these concerns, the Federal Government has taken no action to remove these ingredients from sunscreen.