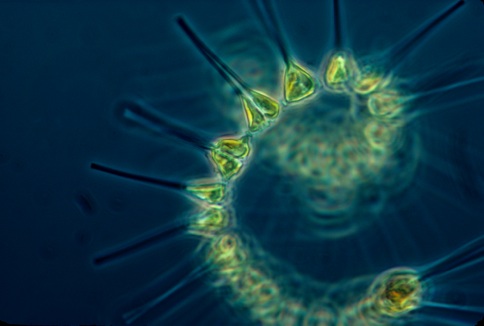 A new study shows that nanoparticles of titanium dioxide (TiO2) and zinc oxide in sunscreen can react with sunlight to harm phytoplankton. Phytoplankton are microscopic marine plants and an important food source for small fish, shrimp, and whales.

Phytoplankton are the basis of the entire marine food chain. These results, coupled with recent research suggesting that nano titanium dioxide could harm coral, raise serious questions about the impact nanoparticles in sunscreen are having on Australian marine life. These ingredients should never have been allowed in sunscreen without testing to demonstrate that they are safe for human health and the environment.

The study’s authors found that titanium dioxide and zinc oxide in sunscreen both produce hydrogen peroxide when exposed to sunlight. Previous studies have shown that this can damage phytoplankton.

The authors then investigated the concentrations of hydrogen peroxide and titanium ions in the water at different bathing beaches in the Mediterranean. The scientists concluded that increased tourism – and hence increased levels of nanoparticles from sunscreen in marine environments – could have “important ecological consequences.”

Recent studies show that nano zinc oxide is highly toxic to aquatic organisms and nano titanium dioxide has been found to be toxic to rainbow trout, algae and to water fleas – especially after exposure to UV light.

Friends of the Earth has also revealed that sunscreen manufacturers have been selling nano products as non-nano and the Australian Competition and Consumer Commission (ACCC) has failed to take any action.

The safety testing and labelling of nano-ingredients in sunscreen is vital to ensure these products are safe and that Australians can make informed choices.