Spraying sulphate aerosols into the atmosphere 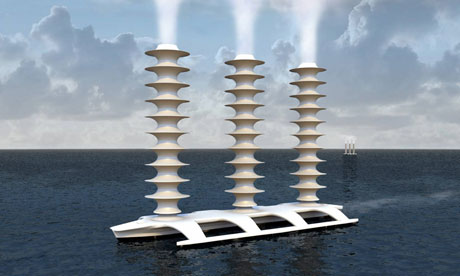 Human inaction on climate change has led to some crazy ideas and suggestions − most notably geoengineering − the large-scale manipulation of the planetary environment to counteract climate change. Geoengineering ideas include seeding blooms of ocean algae with iron nanoparticles; reflecting the sun’s warming rays back into space with lots of tiny mirrors; and covering the Sahara desert with trees. But at the top of this list of insane ideas must surely be the spraying of sulphate aerosols into the upper atmosphere to reflect sunlight back into space –sometimes referred to as global dimming.

One of the most vocal advocates of this idea is Harvard University physicist David Keith, who calls it “a cheap tool that could green the world.” Keith suggests we start with a fleet of just ten jet planes injecting sulphates into the atmosphere, which would then rise to a fleet of hundreds of planes, before carbon emissions started to fall. Other suggestions include using artillery, balloons and giant chimneys to get the particles sky high. But the stakes couldn’t be higher.

The only ‘scientific experiments’ big enough to test these ideas would have to be large enough to potentially affect the entire planet, risking uncontrollable outcomes. What’s more, a recent study in Nature Communications suggests all major geoengineering proposals will be largely ineffective, with unintended and potentially unstoppable consequences. Despite this, there is a real threat that some governments and scientists will push ahead with geoengineering, irrespective of a lack of global consensus. The fact geoengineering is still being considered at all suggests we have already experienced the global dimming of some scientists…deluded into thinking they can control the climate.