Sunscreens Exposed: Stripping away the gloss 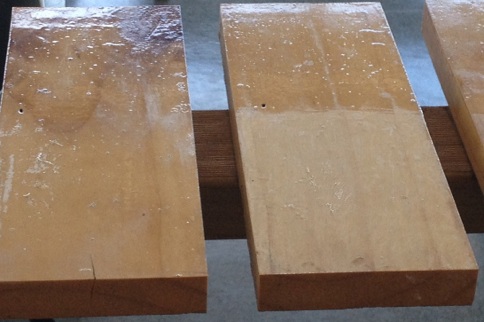 With the help of the students from Trinity College, Colac, Friends of the Earth has completed a Citizen Science Experiment investigating the effect that a number of popular Australian sunscreens have on the coating of Colorbond steel and on varnished timber.

The results from the Colorbond steel were inconclusive. However, several popular sunscreens containing nanoparticles were found to cause serious damage to the wood varnish. These results are consistent with Barker and Branch’s 2008 study and raise serious concerns about the continued use of nanoparticles of anatase titanium dioxide in sunscreen.

In 2008, industrial chemists Phil Barker and Amos Branch from Blue Scope Steel confirmed what many had suspected – namely – that the new use of nanoparticles in sunscreens posed novel and uncertain risks. Of particular concern to these researchers was the use of sunscreens containing nanoparticles of anatase titanium dioxide by roofing installers, which came into contact with and caused damage to Colorbond panels as they were being installed. The scientists observed that the nanoparticles in the sunscreen were reacting with the sun to create free radicals, which were causing the roof coatings to break down up to 100 times faster than normal.

What did we do?

This project repeated key aspects of the Blue Scope Steel research – particularly the exterior exposure testing. This measured the extent of gloss reduction in pre-painted steel products that were exposed to different sunscreen formulations over a 12-week period. The experiment also investigated the extent of gloss reduction in wood panels coated with a popular weatherproof timber varnish.

Two matching sets of 17 steel and timber panels were prepared – one for each of the different sunscreens tested and one control.

16 different sunscreens were tested containing either chemical-based (organic), mineral-based (zinc oxide and/or titanium dioxide) UV-absorbing active ingredients. These were applied to the bottom half of each panel. An additional Colorbond steel panel and varnished timber panel were designated as controls, with no sunscreen applied.

The two matching sets of 17 steel and timber panels were mounted onto racks, which were secured onto the roof of Colac Trinity College and a residential house in Melbourne and exposed from mid-November 2012 to mid-February 2013.

Following the 12-week exposure, sunscreen was removed by rubbing the panel surface using soft paper towels soaked with a warm (∼40 ◦C) detergent solution for approximately 1 min, and then rinsed with water and air dried. Initial gloss measurements were made by students at Colac Trinity College, followed by measurements using a 60˚ gloss meter (Byk-Gardner) by Dr. Gregory Crocetti. 5 gloss meter readings were taken from each half of each panel, subsequently used to calculate means and standard errors.

What did we find?

Visual observations by students largely agreed with the subsequent gloss meter readings. Results from the Colorbond exposure experiment did not offer any conclusive findings. However, clear trends emerged from both replicates of the timber panel exposure experiments.

It was found that almost all sunscreens were able to remove some of the gloss from the polyurethane timber varnish, with an average gloss reduction of 41.5 % across the 16 tested sunscreens.

What do the results mean?

The results from our Colorbond exposure experiment were inconclusive. However, clear trends emerged from the timber panel exposure experiment. It was found that almost all sunscreens affected the polyurethane timber varnish. However, the highest levels of gloss reduction were found in a product known to contain nanoparticles of anatase titanium dioxide.

We understand several Australian sunscreens have reformulated to avoid using anatase titanium dioxide, following the alarming Blue Scope Steel findings. However, despite these actions from industry and clear concerns from scientists, our sunscreen regulator – the Therapeutic Goods Administration – has taken no action to remove this potentially dangerous ingredient from our sunscreens.