What will be the future of food? 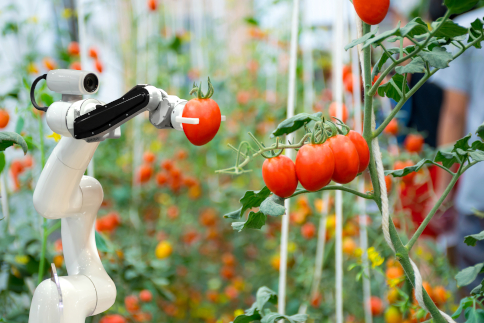 The global pandemic has exposed the flaws in our current highly concentrated, inequitable, industrial food system. At this moment, we stand at the crossroads with two starkly different, and fundamentally incompatible, visions for the future of food. One leads us to resilience, regeneration, and justice for communities, biodiversity, and our climate. The other entrenches current health, social and economic inequities, and worsens our climate and biodiversity crises.

Friends of the Earth International recently organised two webinars for member groups exploring the impacts of new technologies such as gene editing and digital agriculture on food sovereignty – and outlining our alternative vision for the future of agriculture.

Genetic modification is the direct modification of genetic material by humans. It’s fundamentally different from selective breeding, which works with the existing genetic diversity  in plants and animals. The vast majority of GM crops are herbicide tolerant. This has led to a huge increase in herbicide use – particularly in the US, where the majority of GM crops are grown.

The patents associated with GM crops have important implications for food sovereignty – particularly in the developing world – as they mean that farmers can no longer save their own seed. GM seeds are more expensive, and they use more pesticides – which means more debt for farmers. This can be a real problem if their crops fail.

In recent years, several new GM techniques have been developed that can target particular sections of the genome. Industry has referred to these techniques as gene editing – implying a level of precision that  doesn’t exist. The most popular of these techniques is CRISPR – as it is the cheapest and easiest to use. However, just like older GM techniques, it is prone to genetic errors – such as large rearrangements and deletions of DNA. Scientists have raised concerns that these could result in the production of novel toxins and allergens – with potential consequences for food safety.

Gene editing techniques also make the genetic modification of animals much easier than it has previously been – raising serious ethical issues. The biotechnology industry has tried to argue that genetically modifying animals could have animal welfare benefits – such as disease resistant pigs. However, these animals are designed for intensive farming systems that are inherently unethical and unsustainable.

In 2014, the US company Recombinetics announced they had developed gene edited hornless dairy cattle. They argued that the genetic modification was just a small genetic ‘tweak’ and that their cattle shouldn’t be subject to safety assessment or regulation. Five years later, completely by chance, a scientist at the US Food and Drug Administration discovered that the genome of the cattle contained remnants of the bacterial plasmid used to engineer the hornless trait. This rogue DNA coded resistance to three commonly used antibiotics – posing a potential health risk – and highlighting the importance of regulation.

There has been a huge global push by the agrochemical industry  to exempt gene editing from GMO regulations. As they did with the first generation of GM crops, scientists claim these techniques are precise and can be used to develop drought tolerant, salt tolerant, ‘climate ready’ crops. And – as with the first generation of GM crops – there is still no evidence to support these claims.

This industry push has had variable success. Australia, the US, Brazil, Argentina, and Japan have all exempted some of these techniques from regulation. Meanwhile, the European Court of Justice ruled that these techniques pose the same risks as older GM techniques and need to be regulated in the same way. New Zealand has also said it will regulate these techniques – and many countries are still deciding.

Digital farming stems from developments in several different farming technologies – including data capture, analysis and connectivity, machine learning, sensors and satellites, robotics, drones and automation. Much like gene editing,  digital farming is being promoted by agribusiness as a panacea for all agriculture’s problems – allowing ‘sustainable intensification’ to feed a growing population.

When assessing the roles new technologies can play in feeding the world, it is essential  to look at who controls them. Do they empower farmers? Or do they put even more power into the hands of giant multinationals?

Is this the future of food we want?

The industrial agricultural system that dominates in places such as the US, Canada and Australia, actually only makes a relatively small contribution to global food production. 75 per cent of the world’s food is still produced by smallholder farmers, many of whom are in the Asia Pacific region.

The hi-tech vision of farming being promoted by the agro-chemical industry encourages vast fields of monoculture – with the inputs controlled by giant corporations. Fortunately, there are alternative solutions.

Four decades of scientific evidence show that agroecology technologies, innovations and practices are the most effective agricultural response to the environmental challenges that threaten our future. They can help us transition to food and agriculture systems that are environmentally sustainable and socially equitable. All we need is the political will to implement them.

Friends of the Earth Asia Pacific supports food sovereignty – the right of peoples to healthy and culturally appropriate food produced through ecologically sound methods. We call on governments to support peasant, family, and artisanal producers, to build up national and local food supplies, and shift public policies and subsidies away from corporate farming towards agroecology.

Find out more about Friends of the Earth’s work on Agroecology.

Find out more about gene editing.

Find out more about digital agriculture.