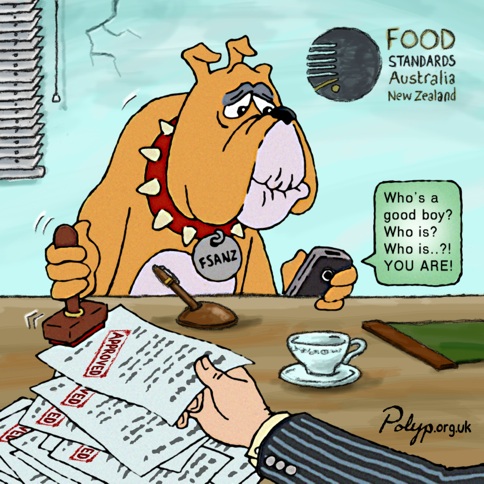 Friends of the Earth recently published test results showing that – contrary to the claims of our food regulator Food Standards Australia New Zealand (FSANZ) – nanomaterials are present in foods in Australia. They are widespread, untested, unapproved and unlabelled, despite us having laws that require novel food ingredients such as these to go through pre-market safety testing and approval.

FSANZ has published a response to our test results on its website. FSANZ’s statement is an extraordinary mix of deception and elaborate evasions. It demonstrates once again that FSANZ works on behalf of industry and not in the public interest.

FSANZ relies on two arguments to excuse their failures and justify continued inaction. Neither holds up to scrutiny.

FSANZ claims that these additives have been used for decades in the global food supply and that there is therefore no cause for concern. This argument is disingenuous. Titanium dioxide and silica have been used in food – but nano titanium dioxide and nano silica have not. And FSANZ knows that nanoparticles behave differently and carry very different risks to bulk particles. FSANZ’s sister agency the Australian Pesticide and Veterinary Medicines Authority (APVMA) stated in a report released last year that there is:

“general consensus that as a result of an increased surface area, altered surface chemistry and increased potential for dissolution, there is a potential for nanoparticles to exhibit a toxicity profile that deviates from that of conventional materials of the same composition.”

FSANZ cannot rely on studies looking at bulk titanium dioxide and silica to infer the safety of the nano forms of these chemicals.

FSANZ’s claim that these nanoparticles have been in the food chain in Australia for decades is also directly contradicted by the FSANZ claim – made under oath to Parliament on several occasions – that nanomaterials are not used in foods in Australia.

FSANZ’s second argument that these nanoparticles are safe for human consumption is not supported by any evidence.

“FSANZ and other international food regulatory agencies have not identified any health effect known to be associated with the use of nanoparticles of titanium dioxide and silica, following oral ingestion in foods.”

Not identifying a health effect is neither a scientific nor evidence based standard – particularly when FSANZ has refused to even acknowledge the presence of nanoparticles in foods in Australia. It is simply evasion. FSANZ must be able to demonstrate safety – and the agency cannot do that with either nano silica or nano titanium dioxide.

There is the now a substantial body of peer-reviewed evidence indicating potential health concerns with the ingestion of nanoparticles of titanium dioxide and silica. A study released last year shows that titanium dioxide from food can pass from the intestine into the bloodstream. Animal studies of nano titanium dioxide show it can damage DNA, disrupt cell function, interfere with the immune system and cause organ damage.

Both nano silica and nano titanium dioxide are also being reviewed by the European Chemical Agency (ECHA) because of concerns regarding human health impacts. But FSANZ can somehow assure us these products are safe.

First FSANZ promised that nanomaterials will not enter into the food chain in Australia without pre-market safety testing and a proper assessment and approval process.  Forced to abandon that lie, FSANZ now claims, don’t worry, it’s all safe.

FSANZ’s arguments reek of an agency trying to cover up its failings and deceptions. Its justifications are ideological not scientific and unfortunately it is public health that is put at risk when the agency charged with protecting our food decides that protecting industry is more important.

These foods should not be on our supermarket shelves until they can be shown to be safe. Unfortunately, FSANZ has demonstrated that it can’t be trusted to do that work.